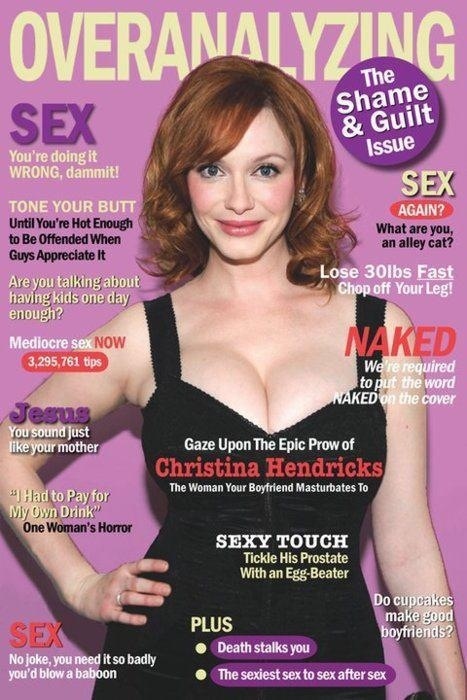 Cosmopolitan is at it again. Trying to mitigate their “Please him better!” terrible advice for insecure women with “But, it’s okay, you’re better than him!”

The “girl power whoo” attitude of their online article 12 Things Women Do Better Than Men annoys me because it tacitly marginalizes men without recognizing the full story. For each “fact” Cosmopolitan cites a study, because yanno, that’s the final authority on the men v. women debate. As a gender egalitarian, I say this is not helping feminism.

This junk list confirms what I’ve already known:  The average Joe and Jane columnists suck suck suck at reading and interpreting scientific studies. (In this case, it’s Christie Griffin, who lists some of her favorite things on Twitter as “dresses” and “karma.”)

I’ll give them a few of the stereotypes. Women are cleaner*, eat more diet consciously, and live longer. They statistically make better lifestyle choices that are good for general health and longevity. Sure. It still doesn’t say much about happiness or other factors about that go into quality of life. This is where Cosmo’s list falls off the boat.

A study at the University of Western Ontario says that women have higher anxiety about interviews, but prep and perform better.

But there’s no objective scale for “best” interview qualities. Here’s the school’s press release about it. The study was done by a doctoral student under a couple professors, but I can’t find it published in any journals, which makes me think it was a poorly-conducted or insignificant study. I have no idea what the methodology was or if more than one person was doing the judging.

In the professors’ previous work, interviewers were asked to rate the interviewees using a Relative Percentile Method that the professors themselves wrote. Nothing says ass-kissing your professor like citing their work as a reference in your own.

Men like to fuck hot women? No! News to me.

We Have Stronger Immune Systems

As a BioChem major who studied under a virologist, this immediately didn’t sound right.

The study is titled “Gender differences in expression of the human caspase-12 long variant determines susceptibility to Listeria monocytogenes infection.” It looked at the expression of a single human gene transferred into mice, and then assumes that this inflammation effect would translate to humans. Does that not ignore the fact that the Caspase-12 gene is just one component of a complex immune system? Have men evovled different adaptations for other kinds of infections or even other food-borne pathogens?

Cosmo makes a broad claim for a weak conclusion.

I have a personal anecdote for this one. My fake stock account at updown.com has a 15% return because I invested in safe companies like CVS/Caremark and Blizzard Entertainment. It’s still only a 15% return.

Yes, women are more risk averse in a lot of areas, but it can also prevent them from flirting with the great rewards that those risks can grant access to.

But in the “real world” it doesn’t matter all that much because there’s still a disproportionate amount of women studying the humanities over the sciences and having trouble landing prestigious positions. We still get paid shitty, especially after age 35. The wage gap is smaller but still there for science and tech jobs.

Some months I want to relentlessly mock the entirety of Cosmopolitan, but there’s already a blog that does it remarkably well.