Move over muffins.  Cupcakes are the new story this week in controversial political news.

Campus Republicans at the University of California Berkeley will be selling cupcakes on Tuesday at an “Increase Diversity Bake Sale.”

In their tiered cost system, white men will pay $2 per cupcake, Asians will pay $1.50, Latinos will pay $1, African Americans will pay 75¢  and Native Americans 25¢ cents per cupcake. Women will get 25¢ off all prices, said the original Facebook event invitation, which has since been changed according to student newspaper The Daily Californian.

The bake sale is a satirical protest of SB 185, which, if signed by Brown, would allow California public universities to consider a number of non-academic factors such as race, gender and nationality in the admissions process in order to increase campus diversity.

That language, “so long as no preference is given,” confuses me.  If you are considering a characteristic such as race or gender as a factor in the decision-making to admit or not admit a student based on the school’s anticipated student body, then that consideration, by definition, is “preference.”

Affirmative action applied to higher education disturbs me.  The logic is uses to attempt to “help” disadvantage groups ends up devaluing the accomplishments of individuals by choosing them based on the social group to which they belong rather than their qualifications.  It can hinder general progress and result in more discrimination.

I’m no libertarian; I like progressive taxation too much.  But I’m certainly center of far-left with opinions such as this.

At this bake sale, though, I think they fucked up the satire aspect, if they wanted to direct it towards this specific bill.  I’m not entirely sure why, as an Asian woman I would get a 75 cent discount, when in the University of California system, I’m guessing Asian women are a statistically high proportion of the student body relative to their proportion in the general population and would be among those to suffer the most from this bill.

Anyway, cupcakes suck.  They have a distinctively cheap texture and flavor from the cake to the icing.  Even after my discount, I would not pay $1.25 for this abomination of the culinary arts.

Here’s a recipe for cheesecake cupcakes.  I couldn’t find the exact ones I made before, but I also added a little freshly grated lemon zest and used Neufchatel cheese instead of sour cream.  Drizzled on top with blueberry jam.  Mmmm, cheesecake. 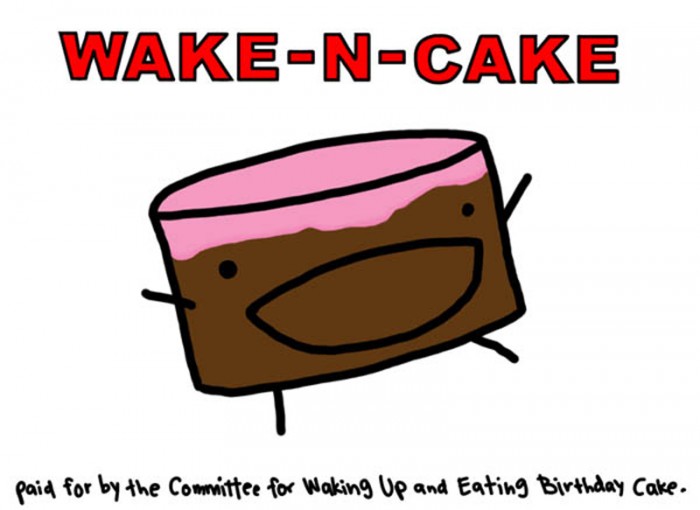