Polling lower than ever, Chris Christie is failing the lady electorate. What issues do women voters care about and what can the NJ Gov. do to change?

Also, if you love me enough when you get there, disable your popup blocker and click on all the ads on the page (no malware I swear!). My freelance ass needs ad revenue.

I bought my Macbook on a whim, a very expensive whim, three years ago.  A daily user, I do not regret it a bit.  I love this thing; it’s pretty much my traveling companion. But for my Apple loyalty, the PC-loving blogosphere calls me foolish, pretentious, and technically illiterate.

From a financial-technical standpoint, I understand Macs are expensive and you can get more raw speed and power for your buck otherwise.  A computer science major with Asperger’s who was painfully trying to court me, once turned on my Macbook and, referring to the boot time, said, “It’s so SLOW!”

Here’s what I know about my laptop compared to my friend’s laptops that run Windows:

It’s lightweight.  It has excellent battery life.  It never overheats and I can often leave it on my lap for hours comfortably.  The interface is aesthetically pleasing.  The software rarely has problems.  It has frozen to require a reboot maybe twice in its entire life, and that’s statistically impressive considering I’ve used it everyday for three years.

After accidentally dropping it on concrete, part of the main logic board affecting the battery got damaged, and I took it to the Genius bar.  The customer service was excellent, and when I got my Macbook back in 3 days after being shipped out and shipped back, in addition to fixing the problem, they had replaced the keyboard (one button stuck a little cause I spilled something), fixed a chipped corner, and cleaned the entire casing impeccably to look like new.

I’m sure 10 years ago, finding compatible software for Mac OS was a pain.  But the gap is closing. Things I’ve found to be incompatible:  A couple crappy flashdrives.  Verizon’s music software for my phone (big loss, my iPod nano is better). And .exe files from megavideo ads that want to install malware.

But I just want to be able to write papers in Word, occasionally Photoshop something, and have 10 tabs open at once in Chrome without it crashing.  For these functions, Apple has fulfilled my needs.

As with my Gopher versus Groundhog post, I would like to clarify that I do not endorse underground emu/ostrich fighting rings.

I was at the Prospect Park zoo in Brooklyn, and there was some funny-lookin’ bird looking at me. I wasn’t sure it was an emu or an ostrich, so I did some research.

The verdict:  due to its blue head, I declare it an emu.

Emus are darker in general, with dark brown, gray, and fine black feathers. During mating season, the skin on both male and female emu necks will turn blue. Ostriches have a thicker plumage with white heads. With emus the female attracts the male, but with ostriches the male pursues the female.

Who would win in a fight? Probably the ostrich.

Here’s a video of two ostriches fighting in the wild: http://www.youtube.com/watch?v=L0HkAIyZRn8

Here is a video of an emu being creepy: http://www.youtube.com/watch?v=CO8u1hSmuWc

But the emus got one cool thing over the ostriches. This is an emu egg: 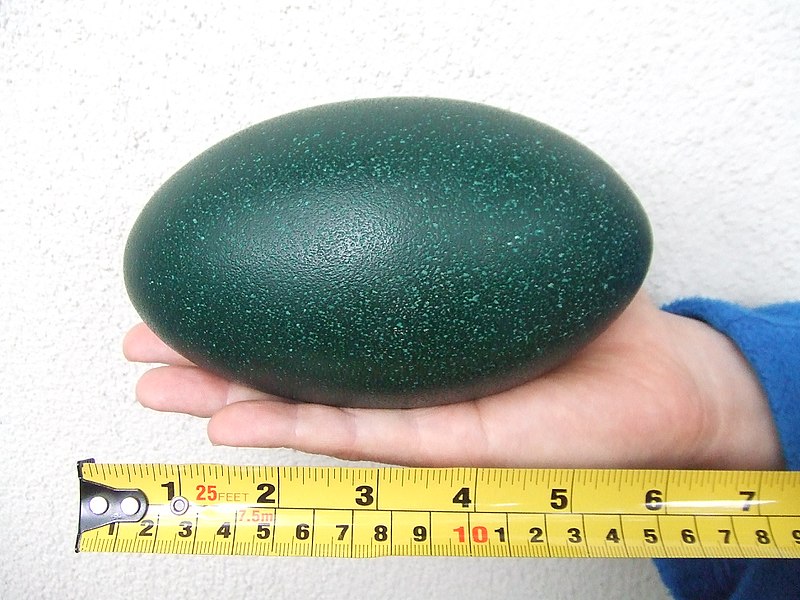 It’s all green and oblong and cool-looking! Ostrich eggs just look like giant chicken eggs, but this thing looks like fell out of a dinosaur. All around, I’d say the emu gets points for being weirder.

I normally reserve this type of stuff for my tumblr, but I’ll make an exception for Ze because he’s awesome.  Also bandcamp has a specific embed code for wordpress and that’s also awesome.

“Today can go fuck a diseased donkey.”  Take that, day.

He also has a book based on his Young Me, Now Me project that’s available for pre-order on Amazon.  And dear boyfriend, if you’re reading this, it is on my amazon wishlist and will come out shortly before my birthday.

Clicking on WordPress’s Site Stats obsessive compulsively? Admit it, there’s something psychologically rewarding about knowing that people are clicking on your blog pages and perhaps even reading them fully. Here are some sites that I’ve pimped my own links on and have gotten results:

If you got here from SU, Thumbs Up!  The only toolbar I ever truly loved. If you’re not familiar with it, the idea behind StumbleUpon is very simple. You thumbs up or thumbs down pages and, using the patterns of what you like and don’t like, it will find similar pages for you.

I once “liked” my own page, added tags to it, and within an hour that page had 500 new hits. The view rate went down after that raging hour, and it didn’t happen to the other page I “liked” and tagged at the same time, but still… something happened there and I continue to get modest hits from StumbleUpon.

Find questions with a topic on which you have written, answer the question simply, and then cite yourself, noting that there’s more information on the blog page. Yahoo Answers isn’t just limited to searches from Yahoo users; a lot of these pages will come up with specific Google search terms as well.

Given the number of contributors to the social news network reddit, you might think you’ll get overlooked. But if you have a clever, topical, or funny post title, the chances of getting hundreds of hits increases expotentionally.

I wouldn’t recommend posting to your personal social network sites every time you publish, but if there’s something interesting or you’re really proud of that you think some of your friends will like, it can’t hurt. Be careful though if you’re writing something NSFW and are friends with your mom.

Post comments on other similar wordpress posts to your own. But don’t link to yourself solely as a blatant self-promotion, because that would be rude. Add more insight or a different perspective and make it clear you read that author’s post as well.

If you write specifically on a certain topic, it might be worth the effort to join a forum on that topic to find readers with an interest in your content.

Despite a common belief, adding more tags will not inherently increase page traffic. Tags will help search engines properly categorize but will not help the search engines add you to their databases. Pings, however, are a different story. Here is a great short description of pinging.

If I forgot any good sites or tips, feel free to leave a comment!

Once again, Jon Stewart, without aiming for that particular end, defends his controversial title as the most the trusted name in news.

I’ve seen his stand-up and he’s not the funniest guy. (During the writer strike, I think Colbert outshined him on comedic wit.) But Stewart’s an expert on pointing out hypocrisy, and, because I can think of no other words, so very very right.

He then goes back to The Daily Show to accuse Fox of airing a heavily edited version:
http://www.thedailyshow.com/watch/mon-june-20-2011/fox-news-channel—fair—balanced

(If someone can tell me how to embed these Daily Show videos without upgrading my wordpress account, that’d be great. Copy and pasting the site’s given embed code into the html box doesn’t work.)

Ahoy 2011.  The second week of the 6th month of the year is already over.  Unless more interesting things start happening in the next half of the year, jibjab’s yearend video is going to be 30 seconds long and consist entirely of a certain liberal disappointment’s weiner.

Continuing the X-men movie franchise pattern of excellent casting and okay everything else, X-men: First Class has so far been the only decent action movie of the summer.  Correctness to comic canon and history aside, all I wanted to see was Magneto fuck some Soviets up, and it almost but didn’t quite deliver.

You already know what I think about Thor.  I didn’t see Jack Sparrow, exclusive edition, because I don’t like rum catch phrases enough to justify $12 and 2 hours of Johnny Depp.  I also didn’t see Rango, but believe that any motion picture with that that amount of short-sleeve, Hawaiian shirt requires more PCP.

Looking at the Billboard current rock 100 I’m depressed that I’m most impressed by Rise Against. Also, Korn apparently decided that its krumper fan base was not large enough and incorporated dubstep demon Skillrex, known for synthesizing the sick beats of a giraffe fucking a tugboat.

Linkin Park, I remember you fondly in my bad poetry-laden teenage years as the angry but catchy musical backdrops to badass mechabot warfare–a deep, complex music video metaphor for neglectful parents and broken post-pubescent hearts.  But when last year’s “Waiting for the End” was released, I could only think, how apt a song title for your career.  Really, your most recent music is the soundtrack to the most boring mid-life crisis ever.

Mama bear of Minnesota, Michelle Bachman.  She eats insanity and shits crazy.  Like Joan of Arc she’s a tragic figure in that she’s blatantly out of her mind, but someone gave her power anyway.  In Bachmanland, chlorofluorocarbons cure cancer, progressive taxation makes all of her 23 foster children cry, and Obama wants to stick his icky black power fingers in the assholes of Muslim dictators and then marry them.

T-Paw.  The only thing I know about him is the mononym T-Paw.

Then there’s the guy “who looks like every guy who ever fired your dad.”   Oh Mitt Romney.  You are the awkward moment when you say goodbye to someone and end up walking in the same direction.  You have the charisma of a school bus fire.  If you lose the actual Presidency in 2012, I’m quite certain you have the hairline to play the Presidency in every action film that will ever be made.

And then there are some other people who don’t matter and one who will remain unnamed that likes to pretend she still does.

Runner-ups to the largest disappointments of 2011 thus far include the unemployment rate and mid-season finale of South Park.