What the FUCK is with this stupid $30 custom css bullshit where they won’t even let me access the original .css file.

If it wasn’t for wordpress.com’s easy follow system and my lack of PHP knowledge I would switch to self-hosting so fast.

On that angry note, if any CSS developers know how to make it so I can have a fucking site title on iNove theme that doesn’t overlap with the menu bar, I could really use some help with troubleshooting and this stupid “overwrite” thing that doesn’t seem to be working. I feel like some
tags could fix this easily, but I can’t get it to work properly.

I blogged a lot. I blogged about different things. I looked at my stats. Then I blogged more and wrote for different sites and in different ways.

This is a cute animal. On a hoodie. On a girl.

My boobs are actually much bigger than that in real life. I’m #asian and a 34C.

Hai look, I’m talking about ASIANS and BOOBS on the INTERNET! –

Seriously, what’s up with all these “How to Blog” blogs following me. There’s too many. Find a niche, guys. If you are supposedly SEO geniuses, you should know that already.

–
There you go. The secrets to success. Maybe read one or two tutorials. But mostly just try a bunch of shit and then replicate what works.

Trust me, I have big boobs.

Some WordPressers obsess over their stats, seeking to maximize their page views, and publically posting data.

If you’re curious:  I have 100K hits. This will be my 312th post. I have 418 comments, although to be fair, almost half of those are probably me replying to people. Most referral links come from Google, and the most popular posts are the ones on weird and controversial topics.

It’s been fun—learning what trends and what doesn’t, how to use tags effectively. But it’s not something about which I ever had huge hubris. I know I could have been more aggressive by commenting on other blogs and posting on random forums. But I know views alone don’t immediately result in quality comments or discussion.

Over the last year, I’ve noticed an increase in random “likes” and followings by other bloggers. There are a lot of terrible blogs out there, mostly from people who never made it past the level of my first Geocities site. So, if you’re reading this in your subscriptions and I didn’t follow or like you back, it’s probably because your blog is boring. I’m not interested in joining your little microcosm of bloggers’ circle jerking.

If I did follow you back, congrats. You’re above average.

I was watching Girls on HBO. Otherwise known as Nepotism: That Show with Starring Famous Daughters.

The main character is a 24-year-old trustafarian who has a Bachelor’s in English. She approaches her boss at the place she’s been interning for two years and demands to be compensated for her services. He tells her he’ll be sorry to see her go.

“But Joy Lynn got hired after interning!”

That’s when I realized that I have a shot at this game.

I made a resume, which didn’t turn out quite as pathetic as I thought it would be. I can haz paid writing job? 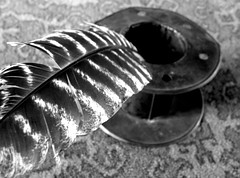 So apparently I missed the memo that you’re supposed to name your domain after your blog name. Like the rebel I am, I made my domain my username instead. Quite frankly, I’m indecisive as an ADD kid who forgot his “special bandaid,” and I’m going to change my blog name several times in the future. An inconsistent url would bother me.

So I hope you readers, whoever you are, don’t get too attached to Clantily Scad. That title was a suggestion from a very special asian girl who owes her life to sparkling cider and mansex.

And I’m going to work on trying to post without any sexual references. I promise. Unless that’s what you want. Or do I just need to even out the sex with violence? Violence, you say?

is a logo “against family violence” even though it looks like the kid is punching his conjoined asexual parents.