This is Allie Brosh.

You’ve probably seen her webcomic if you spend any significant amount of time on the Internet.

She wrote a book with the same title of her blog and then a long subtitle. You can buy Hyperbole and a Half: Unfortunate Situations, Flawed Coping Mechanisms, Mayhem, and Other Things That Happened on Amazon.

And watch Allie read new content from aforementioned book, including a story in which a 10-year-old Allie writes a letter for a 25-year-old Allie, right here.

I’ve been largely AWOL from gchat and facebook this past week, which is atypical for my internet-addicted ass.

This weekend, I got a few text messages from my usual buddies wondering what I was up to and if I was okay.

I am not okay and don’t have any advice for them to give me, but It was nice to know that people notice when I’m not around. (Just for the record, I’m only a little bit of a creep and/or weirdo.)

I’d also like to note that I’m happy to see webcomics lightening up serious topics and getting more exposure and understanding for mental health issues like anxiety and depression.

And to my depressed internet, buddies out there, also hibernating for the winter:  Surround yourself with friends (if you’re up to it) and love yourself. 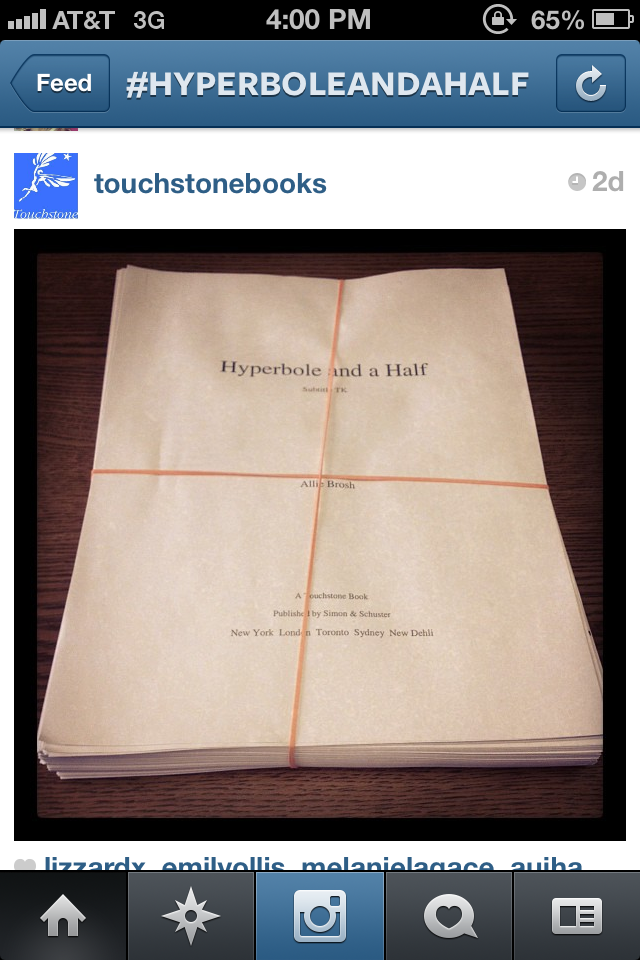 I’m posting today because, dear readers, that time of year has come. It gets dark outside before 7PM, I’m working full-time on my feet, and quite simply, I’m tired of blogging. I’m tired in general.

The part of my brain that does the motivational stuff isn’t working properly anymore.

This post probably isn’t an official “hiatus” post or anything like that. I just put down the payment to renew my domain name, after all. But until my brain reboots itself, there probably will be a slowing of original content, with an occasional political re-blog until the election. After that, I’m not sure…

I’ve been thinking about Allie Brosh, the author of the web-comic-blog Hyperbole and a Half.

She posted her last comic,“Adventures in Depression,” about a year ago.

But trying to use willpower to overcome the apathetic sort of sadness that accompanies depression is like a person with no arms trying to punch themselves until their hands grow back.  A fundamental component of the plan is missing and it isn’t going to work.

I don’t know how she’s doing, or if she ever got better enough to finish her book. I haven’t heard much since the thread she responded to on reddit 6 months ago. But I hope she’s still doing well. And I hope she finishes her book.