My previous commentary are Slutwalk is here and here.

Racialicious blogged a post yesterday entitled “Which Women Are What Now? Slutwalk NYC and Failures in Solidarity” which features this picture from Slutwalk NYC: 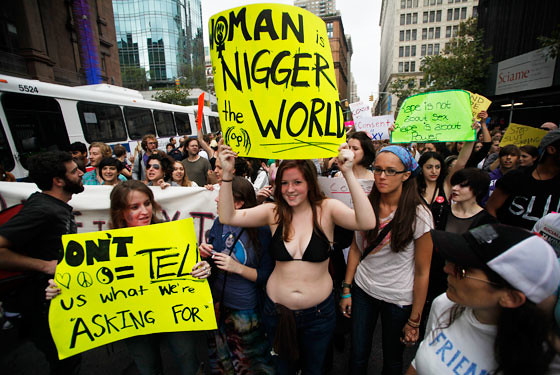 The term, coined by Yoko Ono, became the eponymous title of  a song, “Woman is the Nigger of the World,” performed by John Lennon.

At first glance, the sign utterly confused me.  I hadn’t heard of the song.  The “of” was awkwardly place, making it grammatically unintelligible. It didn’t present as a coherent message, and that’s a possible explanation of why the sign’s holder faced delayed criticism.

After reading the article I believe that the theme the woman was attempting to convey here was the reappropriation of pejorative terms, by referencing what Yoko referred to as a pro-feminist song and making a analogy to the “nigger” reclamation movement to Slutwalk’s reclamation movement for word “slut.” (The analogy is flawed, anyway, since Yoko’s song wasn’t necessarily about term reclamation.)

Both the song and sign have been decried in the blogosphere as “racist.”  Slutwalk organizers have also announced their disapproval for the sign.

Racialicious posted a follow-up post,”Slutwalk, Slurs, and Why Feminism Still Has Race Issues,” in which the author included an emotional response to the comments on their previous post about solidarity in feminism:

Arguing that black people don’t have a monopoly on the term nigger is just fucking disgusting.

Wait, what?  When did the argument that they do have a monopoly on a language’s cultural meaning ever make sense?  The person who wrote this post is obviously not a supporters to those who have been trying to re-appropriate the word, for cultural purposes, for decades.  Ironically enough, the first post mentioned was about lack of solidarity in movements.

If you wanted to apply this type of logic onto Slutwalk, then men who are arguably ineligible for the defamatory title would have no place in the the pro-feminist movement, which I feel would be based on obviously flawed reasoning and hurts progression.

crunktasticCollapse had one of the more articulate comments on the topic of word reappropriation:

“But the idea that it’s fine to appropriate the term nigger without critical engagement of the word and what it represents to the women who are marching with you gives me pause.” Yes. Absolutely.

But doesn’t this critique hold true for the appropriation of the word “slut” as well? It seems to me that this kind of egregious misstep was bound to happen within a movement that has as one of its central tenets the reappropriation of an offensive word. There are a few major models of this kind of reappropriation–those which come out of queer activism and disability activism, in particular. But the “sexiest,” and most provocative of these models is of course, Black folks’ attempt more or less successfully –less I would argue–to reappropriate the n-word.

I’m not going to spend time to parse why semantics evolve, and why cultural shifts of pejorative words to neutral or positive words can be a good thing.  (For those who can’t parse language properly, that means I am for the reappropriation of words such as a slut. And no, “reappropriate” is not a logical inconsistently since the “re” refers to the act of defining again, not the implication that is was once “mine.”)

But I want to pose a couple questions.  You don’t have to limit your comments as answers. Unlike some blogs, I do not like to moderate my comments, even unpalatable or off-topic ones.  Questions may or may not be flame bait:

Has the movement to reclaim “nigger” been successful?  To what degree?  How would “success” be defined?