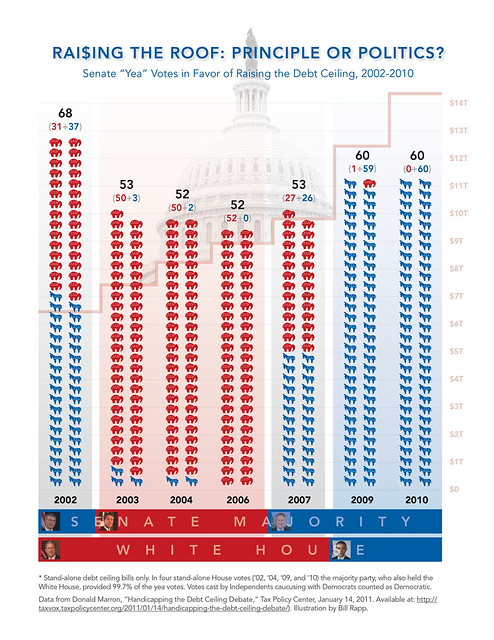 In the fall of 1995, Congressional Republicans refused to raise the total amount of debt accumulated by the federal government of the United States.  It was not raised until the following March.  This gap created a 6-month period, when the Secretary of the Treasury announced a debt issuance suspension, which is known as the 95′-96′ debt ceiling crisis.  During this period, the US Treasury, under President Clinton, took several extreme measures to raise funds without exceeding the debt ceiling or defaulting, including a temporary use of retirement funds for former government employees.

Unfortunately, the measures taken by the Treasury then, would not be as effective in the current economic climate, analysts at Deutsche Bank found.

In 1995, the economy was in the middle of a strong expansion with the unemployment rate around 5.6%. (Today it’s around 9%.)  It was fiscally strong; there was no recovery period necessary from a Great Recession.  The deficit was 1995 was 2.2% of GDP.  Current deficit is around 9% of GDP and rising each year.

The Deutsche Banking analysts were very clear in their report:

Today, the financing needs of the government are so much higher, that diversion of these funds would not last more than a couple of months, and probably far less.

In March 1996, the House controlled under Speaker Newt Gingrich caved in the midst of overwhelming negative public opinion.  President Clinton went on to beat Republican contender Bob Dole for reelection by a 9% margin.

Obama certainly has more to lose right now in terms of potential economic disaster.  But, at 71% disapproval of the GOP, public opinion polls right now are pretty clear.  Americans realize who is at fault here for the impasse.