I’ve lived in Brooklyn for about six months now.  I moved here from New Jersey and have come to find some recurring motifs in the denizens of this fine City.  Feel free to comment if you have any more.  This archetype list is partially inspired by reddit’s /r/ first world problems. 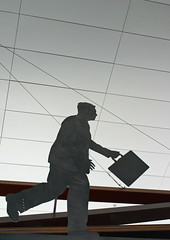 Usually seen with the same twisty grimace to their face at all times, you can most often find the overworked businessperson on his or her smart phone talking loudly and not paying attention to where they’re walking.  Whether the intern is running late with the Starbucks or Wall Street is about to have a financial meltdown, it is a tragedy and most certainly their subordinate’s fault.

Needing to keep a BAC level of crazy in him at all times, the CSHD is the well-known cousin of the sleepy, morose homeless dude.  I don’t know what’s going on in their black trash bags and I don’t want to know.  The CSHD is the most common cause of the comment, “Um, let’s stand on the other side of subway platform.  That side is loud and smells like urine.” Louis CK knows what I’m talking about:

This young NYC specimen makes its living off its art sales and the weekly stipend from Mom and Dad.  Sometimes it tries to sit down on the Subway, but the wads of cash in its wallet make an uncomfortable bump in the back pocket of its skinny jeans.

Enjoying pretending to understand politics, the HTFFA likes to associate with liberals but be a fan of Ron Paul at the same time.  This is known as “ironic” and is a comedic trope.  HTFFA often misuse the word “trope” in order to sound cool and educated.  The HTFFA usually has a Bachelor’s degree of some sort but makes a point not to use it for the sake of artistic sacrifice.

Synonyms: Indie Douchebag, Liberal “I went to NYU” Elitist, Pretentious Asshole in Plaid Shirt and Glasses Too Big for his Face.

Do you know his name?  I see him everyday when I buy a soft drink and I don’t.  It’s probably Mohammed Al Assad Ahmadinejad or something like that.  He owns the Bodega Cat, which is really cute.  Though every time I pet it I wonder if it’s had its rabies shot.

With roots in hippies and black people, the Sketchy Rastafarian in the Park is the disputed descendent of Bob Marley. He bounces slightly in his gait in a desperate attempt to look casual and has a keen scent for bacon.  His favorite colors include green, red, yellow, and weed.

Desperate enough to pay up to $30 a gram, the Friendless Guy doesn’t have the social networking skills to buy the most common drug from someone who is not a stranger and runs of risk of purchasing what may actually be catnip.

Work it, move that bitch crazy.   And indeed, the Fashion Babies, are most often crazy, overprivileged bitches.  Or the gay guy who has a moving story about having spent his suppressed youth watching Project Runway under the covers at 2 AM.

Found in abundance on Sixth Avenue, Fashion Babies are either students (I resist the urge to use quotation marks here) or wannabe students at the Fashion Institute of Technology.

Fashion is defined as:

A puzzling force, capable of altering minds to find things (such as clothes designs) completely normal at one point in time, where they would be considered completely ridiculous at any other point in time.  Also, completely ignored by engineers.  Fashion is the continuing quest for the next great style. However, there are only four truly great styles, and they simply supersede one another every 6.4 months.  The four great styles are Couture, Glamour, Chic, Stylish and occasionally kittens, in that order.

Although confused and appalled by the public transit system, out of town tourists are the natural enemy of walking.  A symbiont with the fanny pack, their fears include baby-snatching, crossing the street, and 9/11.

Not included in this list were the cast of Jersey Shore and Long Islanders.