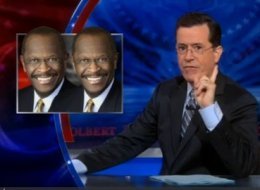 If Herman Cain figures out something he said is unpopular…

“I’ve also said America needs to get a sense of humor.” – Meet the Press

he was obviously joking.

“I believe that life begins at conception. And abortion under no circumstances.” -interview with CNN’s Piers Morgan on Sunday

“The government shouldn’t be trying to tell people everything to do, especially when it comes to social decisions that they need to make.” -same interview, later

…it’s his personal, not political belief

“As to my political policy view on abortion, I am 100% pro-life.  End of story,” -statement released Thursday to clarify his position

If he doesn’t know what something is…

it can go fuck itself because it’s wrong.

Colbert offers an explanation for Cain’s inability to follow himself on the issue of blaming yourself for not having a job. Because he wasn’t referring to all unemployed people as lazy, just the unemployed people that are upset and would like to assert their First Amendment rights.

Now, “I don’t have the facts to back this up”, but I think Herman Cain might have a chance in the race if he only had a competent staff, knowledge on international affairs, actual qualifications, and a pizza that doesn’t suck.