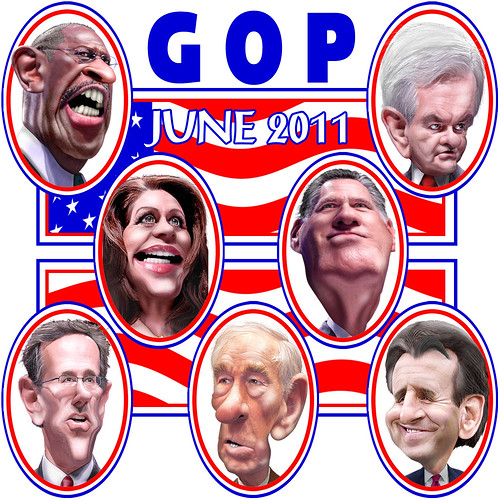 TPM compiles a video of some highlights of the August 11, 2011 Republican debate.  It was more interesting than the first GOP primary debate for sure.

The Daily Beast declares Rick Perry as the winner.  They also compiled their 7 favorite moments from the debate.

T-Paw blew it big time in this debate,  says Salon’s Steve Kornacki, and didn’t do much except try to tear Bachmann a new one.  And they all generally defensive about fiscal policy questioning, according to the NY Times.

BarackObama.com has put together “a helpful guide to a few of the more fascinating positions they’ve taken.”  The charts pays close attention to what the candidates said–and what they didnt say. Will they backtrack? Will they double down? Will they hope we forget?

Herman Cain signed off closed off his portion of the debate (where he tried and failed to temper his earlier remarks about Muslims) with:  ”A poet once said, ‘Life can be a challenge, life can seem impossible, but it’s never easy when there’s so much on the line.”  Daily Intel identifies the quote as disco singer Donna Summer, from her song The Power of One.  She recorded it just over a decade ago as the theme song for Pokémon: The Movie 2000.